Superman Would Probably Give you Cancer (with his X-Ray Vision)

It is challenging working as a one man team, with a full time job (that is not developing games), and trying to get something out the door in a reasonable time frame. Especially when you are doing most of it. I am not doing all of it. I have had some help in updating the graphics and with creating sound / music, but overall I have been trying and failing at doing a chunk of the new enhanced graphics which are getting a complete over hall from the WP7 release. I am really slow at doing graphics so I just felt like I would get on here to complain about it :)

Now that I am done with my complaining, I will give some of the technical details on the Android release.

First of all we are not using Unity. We will going forward. But there are a number of reasons why we are not. Largely because we started developing this game a long time ago and we were planning on using Mono for our cross platform plans (if you read further back in this blog you will find references to that). Then Unity did not have a good amount of 2D support back in the day. It is getting better now, but the game engine was largely built by that time. Unfortunately due to work, Phat Professional Burglar ended up sitting on a shelf for a long time during the Android development not getting touched. Even now getting time to work on it is tough. Anyway, back to being on topic. The entire thing has been coded in Java using OpenGL for graphics. That's it. There is some SQLite in there as well.

I wanted to get a game trailer out over the holidays, but unfortunately I didn't get all the graphics work done I wanted to to make it look ravishing. A trailer IS coming soon though! Overall the game is nearing completion as well. I have about a dozen items on my list left to complete. Some large-ish, some fairly small.

Until next time, enjoy this comment about Superman (and new screen shot):

If Superman wanted to see your skeleton, his eyes would have to blast you with X-Ray radiation. It could give you cancer. Think about it! 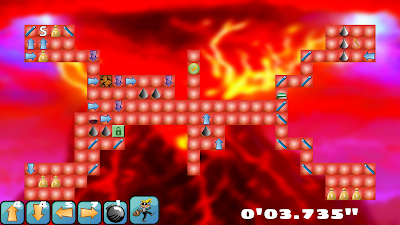