Join the Heist: The Story of a Burglar named Burgal and the Game he Starred in (Part 1)

With the upcoming launch of Burgal's Bounty, I wanted to write about the long history of the game and some of the challenges of the development process.  Burgal's Bounty is coming to iOS and Android on February 15th, 2018.

Before I begin, I want to provide some context for this blog. This is not going to be a story of a game development’s sorrows and success - there are a enough of those. My story does not involve major health issues or major financial issues during the development process. I have read many blogs about both and let me tell you they are intense. I truly feel for the developers who are fighting cancer while working on their passion. This blog will also not include much technical information about the development process (though there may be a small bit here and there). Lastly, as I do not have permission from anyone to use real names, all names have been changed in this blog except for mine. This is a story about Burgal’s Bounty and how it came to life...

Burgal’s Bounty was not the original title of the game - It was called Phat Professional Burglar starring Burgals (with an S instead of just Burgal). It was the brainchild of myself, my brother (Tom), and a close friend of mine (Dick) in my parent’s basement in January of 2001. Phat Games was made up of 4 people - but our music guy (Harry) was not really involved in Phat Professional Burglar because the game had no music. We were generally making games in our spare time as part of an online QBasic game development community and had started making them back in 1993 starting when I was only 10 years old. Being 2001, computer technology could do much better than what the original Phat Professional Burglar ended up being, but at the same time we were making a game in a language that had significant technical limitations.* Further to that, the levels were not designed with casual game players in mind. We didn’t really think commercially with Phat Professional Burglar and even mid-core to hard-core gamers would have found the levels we designed to be extremely challenging. When the 3 of us designed the levels, we were just trying to compete with each other to make the hardest level - not so much make the game fun. As one might imagine, it resulted in an extremely difficult game. The game’s play mechanics included a timer that was counting down and when it reached zero it was game over. Also there was no mouse support - it was keyboard only. The game was build for MS DOS - another restriction of QBasic. Looking back at this all these years later, I seriously have no idea what we were thinking. 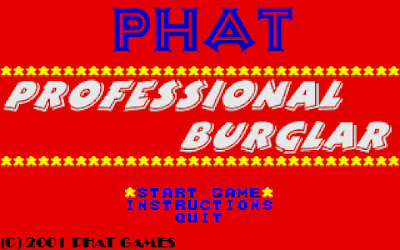 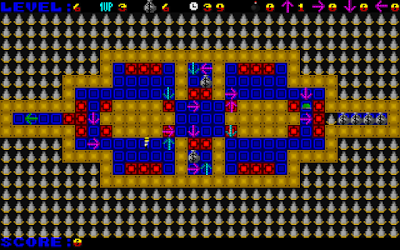 We released it for download on our website back in April of 2001. It had 50 levels, no story, and a small fan base mostly based in the QBasic community. If anyone is interested, It is available on the Internet Archive. You will need DOSBox to run this game. https://archive.org/details/PhatProfessionalBurglar

Phat Professional Burglar for DOS would be the last game Phat Games would complete for 10 years. 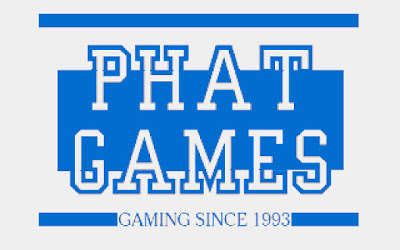 A lot can change in that time. For one, I thought any sort of game development was part of my childhood and that I would ever make games again. I was also no longer living in Canada. I decided to immigrate to America and live in the big and bustling city of New York. While visiting Canada over the holidays of 2010, my expectations about game development would be changed yet again. Like many times in my childhood, this part of the story takes place in my friend’s basement. The iPhone and Android phones had been on the market for a few years at this point and the App Store and Google Play opened up the market for Indie Developers allowing for anyone to self publish - allowing for us to get back into game development. Dick was making a game. He had ported the original MS DOS version of Phat Professional Burglar to C# using XNA for graphics. He was planning to release it on the Windows Phone. Now, I am sure everyone reading this just groaned. Yes the Windows Phone was a complete failure. Yes XNA was abandoned by Microsoft. However, at the time we were hopeful that Microsoft’s smartphone market share would grow. Honestly, it was a pretty good device...and so were the latest Blackberry phones... Remember those?... Anyone? 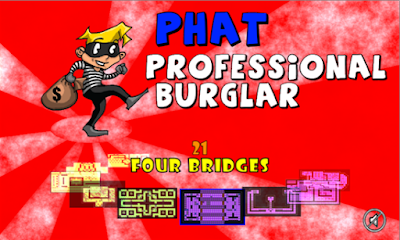 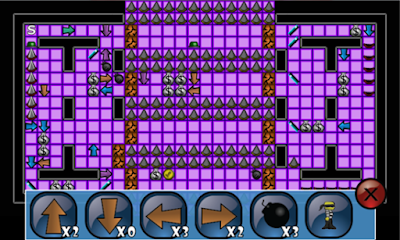 I did not have much involvement in the development of this version of Phat Professional Burglar. Tom redid the graphics, Dick coded the entire thing, and I did some testing and some level design. Early 2011, Phat Professional Burglar was released to the Windows App Store (I can’t remember what it was called back then). It made no money, but because the Windows Phone had a small market, the game was downloaded more than 10,000 times. No one paid for the full version - the market being fickle is not a new thing. 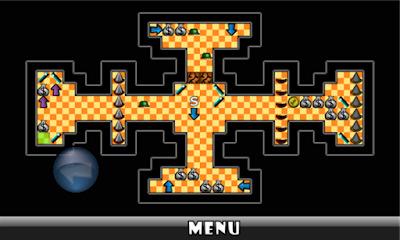 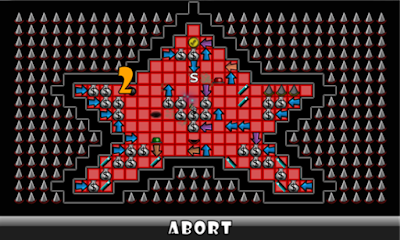 The development of the ports of iOS and Android started soon after - really just the port to Android. So if the ports started development in 2011, why is the game not coming out until February of 2018 you ask? Read on!

I started developing the Android version in native Java using OpenGL for graphics. Why you ask? I don’t really know. I think as it had been 10 years since I had developed anything, and the only languages I had developed games in prior to this was QBasic and C++ I think I just decided I wanted to make things as hard as possible on myself. I started developing the engine in my spare time, but then I got a new day job. I had been working as a Software Consultant in New York since I had first moved to the US in 2007. Due to a series of issues pertaining to my immigration, I needed to find a new job (with an employer that would continue to sponsor my immigration). As such, in the summer of 2011 I started working for a new company that would sponsor my visa status and support becoming a permanent resident.

The new employer required me to travel to client sites all over the US pretty much full time. As a result, I was able to only put a few hours a week of development time in at most. A game engine that should not have taken terribly long to build was going at a snail’s pace. Eventually I stopped all together for almost a year. It was not until I saw Indie Game: The Movie that I my motivation sparked up again. This time I tried to stay on top of it the best I could, but I was overly sleep deprived and was maybe only putting time in every other week. Finally, when I was sent to Oklahoma for a really bad project, all work on the game halted. By this time it was summer of 2013 and I had a long way to go. On the plus side, the game engine was pretty much done at this point.

It was a long year. My last flight to Oklahoma was in July of 2014. I had just gotten my green card 2 months earlier. My next project was sort of “local”. The round trip commute was only 3 hours every day. Yeah I know it still pretty much sucked, but I was able to work on the game again during the commute. I was making progress again! However, for some time an idea had been brewing. Now that immigration was no longer a concern, I had the opportunity to quit my job and take a stab at this full time like many other indie developers before me (and many after). I started looking at my finances and started planning to see how long I could do this without having a job. I negotiated a deal with the rest of the Phat Games team that would let me develop this (and other games) and basically pay the old team royalties if anything I did ever made money. As I continued to get everything in order, I realized one of the challenges I would have with this is that I would be entirely alone. I knew no one in the New York Indie scene or where to go to meet people. However, that would quickly change in 2015 right when I was about to leave my job to plunge into this full time…

*The FreeBasic Community (born from the old QBasic community) have modernized QBasic removing many of the limitations the development language had.  www.freebasic.net

You'll never believe what you will get if you click on this! (MAGFest Retrospective)

Greetings and salutations all,

It appears that it is the style of the times to write a retrospective on how MAGFest went for Phat Games / Burgal's Bounty.  The format will follow a standard agile sprint cycle retrospective because I like to keep things concise and to the point :)  But before that, I want to take a minute to say that this year was Phat Games (and my) first time at MAGFest.  I was blown away.  Never in my life have I had such a great experience at an expo!  Everyone was kind and respectful, there to play games, and also there to provide great feedback.  MAGFest was a very positive experience and I am looking forward to going back next year as an exhibitor or as an attendee!  Without further delay, the retrospective:

What went well:
1. The vast majority of people who played the game seemed to really get into it.  I have never had an expo where so many people would sit down and play through the first 10 levels plus the boss fight.  It was a heart warming and validating experience.  We have been to other expos before, but nothing like this in terms of positive response from the game.

2. Generally, many people who played it also enjoyed the story.  This was the first expo where people went out of their way to consume it and they enjoyed it.   It was awesome.

3. We received a lot of constructive criticism.  I am actively working on implementing a lot of the feedback we received.

What did not go well:
1. There were a lot of bugs found I did not know about.  Most of them are fixed now though :)

2. The tutorial.  It gets the job done in terms of teaching people how to play, but many of the  hardcore gamer crowd, that was there, found it annoying.  It's a difficult thing to balance though, as many people also told me that they liked how the tutorial did not make them feel stupid :)

3. 24 hours.  If I had more help I would have loved to stay open 24 hours.  But as it was, I found myself exhausted after core hours.

What needs to be improved for next time:
1. The Phat Games booth.  While it wasn't bad, it did not really live up to the vision I had.  If I had a little bit more space, and more tape I could have probably made it work.  I would like to see MAGFest for next year cordon off 10 feet x 10 feet spaces so each indie knows exactly the borders of their own space.

2. Press.  I tried to find press who would be attending on Twitter but did not have any luck.  I also was not able to meet any and no one introduced themselves :(

3. Next time I will see if I can find one more person to help out.  I would like to keep the booth open longer next time I go.

That's all.  I hope you enjoyed this quick retrospective on MAGFest.  Burgal's Bounty will be coming out soon!