Time for another update on Burgal's Bounty. The port to Unity for the iOS and Steam releases is making good progress as well as the new artwork. The game will be in a playable state in another week. Currently, the tools to complete the puzzles can be placed, but Burgal can't go through the maze yet.

A number of the Burgal animations have been completed and posted below.

Burgal's Bounty will be at the upcoming PlayCrafting Expo in New York City on October 22nd. Tickets are here.

Enjoy the graphics below and see you at the PlayCrafting Expo!

Posted by Phat Games at 7:10 PM No comments:

Here is a side by side comparison of the old and new art used for the first level! We would love to hear your feedback! 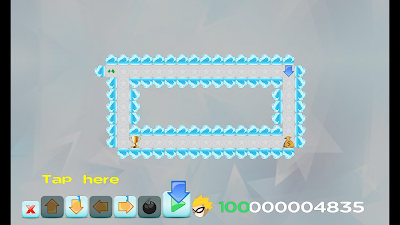 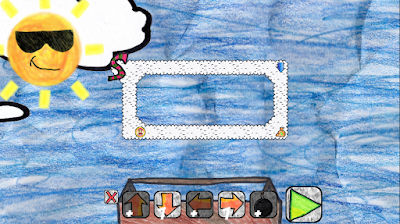 As you can guess by the subject line, we have received our response from IndieCade from our submission back in May of this year for Burgal's Bounty!

We did not become a finalist in the festival, but the response was fairly good overall. I have posted it here in the blog and I have also included Phat Games' response to the response! So, if nothing else, enjoy the read!

The puzzles are reasonably interesting, but the life limit means you can't experiment with different approaches, and trying to mentally trace your way through a large level quickly becomes very fatiguing.

The life limit is likely not going to change for the official launch. It was put in strictly as a monetization piece. It will, however, be removed for the Steam version.

The burglar sprite should be able to face up/down as well as left/right while moving.

This is actually only the second time I have heard this comment. Considering the Burgal graphic is getting redesigned for the official launch, we can give him up and down walking animations.

As you said, the game is a clone of an old MS-Dos Game. It's not appropriated in a festival where innovation leads like Indiecade.

I find this remark unfortunate. I did not say clone. It was a relaunch of a game we made. This was not some Flappy Bird clone where we copied someone else's idea. The idea was originally ours and if this disqualified us from IndieCade because of a misunderstanding I would find this to be very unfortunate.

I thoroughly enjoyed the puzzles presented by this game, and happily played through quite a number. Sequencing makes for a great feeling puzzle arc: as the player sets the machine in motion, tension builds...will they succeed or fail?

We are really glad you enjoyed it!

The strength of Burgal's Bounty's puzzle design is unfortunately often overshadowed by a clumsy feeling UI. Some thoughts: -The tile dock didn't read as a repository for my blocks. Consider leaving it along the bottom, or creating an more obvious animation for its docking/undocking transition. It would also help it feel more like a repository if it responded to the relative proximity of the blocks, rather than just on overlap.

This was something that has been noticed by a number of players. We are improving this part of the experience. Interestingly enough, this is the first time someone has actually come out and formally said it. This was mostly noticed by observations of watching people play.

-Placing tiles was tedious and error prone. Maybe you could scale the board around the selected tile, so to make the selected location far more obvious. Often my finger covered my selection, as well as the surrounding 8 tiles.

We would like to strive to improve this so if other players find this to be a problem it won't detract from their enjoyment of the game. Changes were made to this based on initial feedback. Some people found this approach fine. Others struggled with it. We will continue to see if we can tweak it to improve the user experience.

-Interstitial tutorial screens were haphazardly laid out, poorly kerned, and confusing. It wasn't immediately clear that they were intended to be delivered by Burgal, as they lacked a clear indicator of speech (bubble or otherwise). That made some already confusing text even more confusing. Interactive tutorials are a must to hook anyone who is not a puzzle game head. If that's out of the question, at least consider including images of the various game components you're introducing next to the text descriptions.

The tutorial was a mixed bag. This was not the first thing we tried. It was actually the fourth. It was this way that we chose because no one bothered with it at all. The official launch of the game will have the tutorial updated so that it walks players through how to play on the screen. I do not know if it will be beneficial because we have tried similar things in earlier versions of the game. At the end of the day it seems to boil down to this: No one cares about the tutorial.

-Visual effects could be +'d up quite a bit. The puzzles are an adrenaline rush, and I want the same feeling from the art. Zooms, bullet-time, screen-shake, etc. would all be exceedingly welcome, as the player doesn't have anything else to do but watch. You have a golden opportunity here, the player has made all the choices they're going to make, and now you get to give them a show! Make them feel the anguish of their defeat and the glory of their victory.

Interesting. This is the first time I have heard this comment. Most people just asked for the ability to speed the game up once they press play. Perhaps the visuals would give them more reason to watch the puzzle walkthrough.

That's it for IndieCade's feedback on the game. We would love to hear your opinions as well. Do you agree with what the judges had to say? Did you have anything else you would like to add? Feel free to tweet at us @PhatGames or e-mail us at hello [at] phat-games.com

-Blair
Posted by Phat Games at 4:57 AM No comments:

Introducing a prototype of the new Burgal! The game will also have a paper-ish retro graphic style depicted in here. Let us know what you think!

Posted by Phat Games at 7:55 AM No comments:

A brief history of... Burgal's Bounty

2011: 10 years later, as a hobby project, Phat Professional Burglar is released on the Windows Phone 7. The game saw a number of downloads in that market space but never made any money. The graphics were redesigned for the higher resolution phones. Very little else changed. It should be noted that this is actually when the Android version of the game started development.

2015: The Android version took 4 years to be completed. Not because it took that long to code, but because Phat Games was unable to dedicate time to it. It was being treated like a hobby project for a large portion of that time leading up to the end. When the game was nearing completion, it was sent around with focus groups to get feedback. The one thing that was expressed was that the game needed new graphics. The HD facelift of the Windows Phone graphics were not going to cut it with today's standards. As a result, the game was entirely redesigned again and was put into a 3 month pre-launch on the Android.

Present: With the Android pre-launch period complete, and based on user feed back for the game, Phat Games is giving the game a final polish before the iOS launch (with a formal parallel Android launch). Also, with this revamp we are announcing a Steam launch!


That's right, we are targeting to formally have the iOS and Android relaunch available by December with the Steam release following shortly after. Also, stay tuned for our announcement this fall for Phat Games' next game!