Phat Games vs The Internet

One of the games the Phat team is working on stars a character named Zazumo. We haven't came up with a title for it yet, but it will almost certainly have the character's name in it. As an experiment I thought it would be interesting to see just how much of an impact could be made on the internet by a small indie game development team. Not surprisingly, the word "Zazumo" doesn't come up very much in day to day life, and as such doesn't have much of a footprint on the web. As of today, April 3rd 2011, a google search for "Zazumo" returned only 321 results. How many results will there be after Phat Games pollutes the internet with a multiplatform release of our game? Start placing your bets! 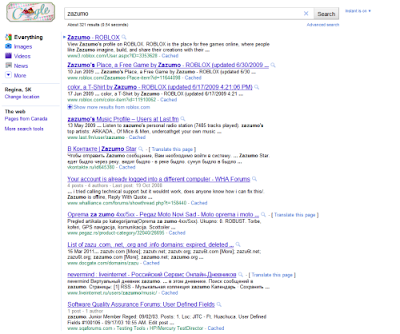